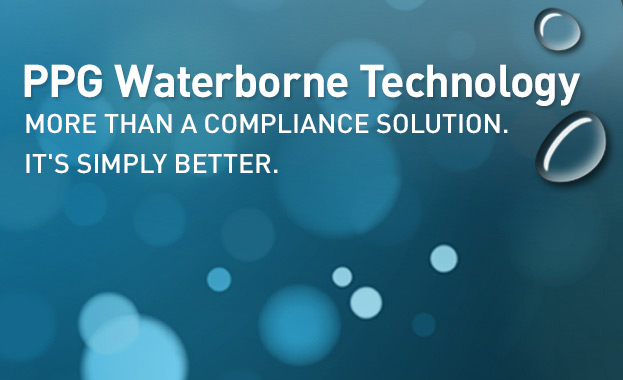 The Superiority of Waterborne

Waterborne systems are superior to solvent systems in many ways, and PPG technology, in particular, has many advantages for collision centers today.

Less odor in the work environment and improved air quality are a few of the environmentally progressive advantages PPG waterborne holds over conventional solvent-based systems. Yet it does so without sacrificing color-matching capability and performance. In fact there’s good evidence that PPG waterborne is simply a better refinishing system than solvent, since the majority of collision centers in the United States that have made the switch to PPG waterborne are located in National Rules areas and are not governed by stricter VOC compliance regulations.

Mechanical mixing, required with solvent-based systems, is time consuming, and if not done properly, can lead to poor color matches, lost productivity and wasted product. With PPG waterborne toners, there’s no need for a mechanical mixing system—just shake and pour. No over-stirring. No grinding down of metallics. Toners pour easily, even in small amounts, for consistently accurate matches. Shops also save space, minimize energy consumption, and have reduced noise levels when using these state-of-the-art toners.

One look at an applied coat of PPG waterborne basecoat, and it’s easy to recognize how its metallic orientation represents a vast improvement over solvent. With PPG waterborne, the uniform evaporation rate works in conjunction with the unique latex fingers to orient the metallic flakes in just the right position to provide the appropriate color travel from face to flop.

PPG waterborne users consistently rave about how much easier it is to achieve “invisible” blends, since they no longer experience mottling or color shifts when fading out the color. When blending with solvent, choosing the wrong reducer can increase color variability, and incorrect gun distance can cause poor metallic orientation and die back.

PPG waterborne pigments are half the thickness of solvent-based pigments. This characteristic results in greater opacity and enables hiding with thinner films. The result is less color shift and fewer coats required.

With the PPG waterborne system, customers will use approximately 25 percent less sprayable base, and 70-90 percent less reducer. The potential material savings is 25-30 percent!

Reports from the field indicate that PPG waterborne generates up to 75 percent less hazardous waste than what is typical for solvent basecoat. Plus, when used in conjunction with Duraprep®-type strippers, collision shops that use a PPG waterborne system can apply for an exemption from Subpart 666666 (H) of the National Area Source Rule.